The accurate interpretation of particle sizes and shapes in nanoporus materials is essential to understanding and optimizing the performance of porous materials used in many important existing and potentially new applications. However, only a few experimental techniques have been developed for this purpose.

A team of researchers, led by Professor Wonyoung Choe of Natural Science and Professor Ja Hun Kwak of Energy and Chemical Engineering [ at Ulsan National Institute of Science and Technology {UNIST}] has recently developed a novel design strategy for synthesizing various forms of functional materials, especially for metal-organic materials (MOMs).

The research team expects that this synthetic approach might open up a new direction for the development of diverse forms in MOMs, with highly advanced areas such as sequential drug delivery/release and heterogeneous cascade catalysis targeted in the foreseeable future.

In the last decades, much research has been developed to the synthesis and design of functional materials, but only a few of them could control the walls of the interior of the particles within the nanoporous materials.

In the study, Professor Choe and his team denomstrated sequential self-assembly strategy for synthesizing various forms of MOM crystals, including double-shell hollow MOMs, based on single-crystal to single-crystal transformation from MOP to MOF.

As one solution, scientists have developed self-assembled porous materials using organic molecules and metals. Metal-Organic Frameworks (MOFs) and Metal-Organic Polyhedral (MOPs) are notable examples and they both have holes all over their surfaces. MOPs dissolve easily in chemical solvent, while MOFs are practically insoluble.

“MOFs take the form of three-dimensional (3D) structure, linking metals with organic molecules, while MOPs agglomerate together to form larger clusters,” says Jiyoung Lee, the first contributor of the study and a graduate student in the combined master-doctoral program from Chemistry department. 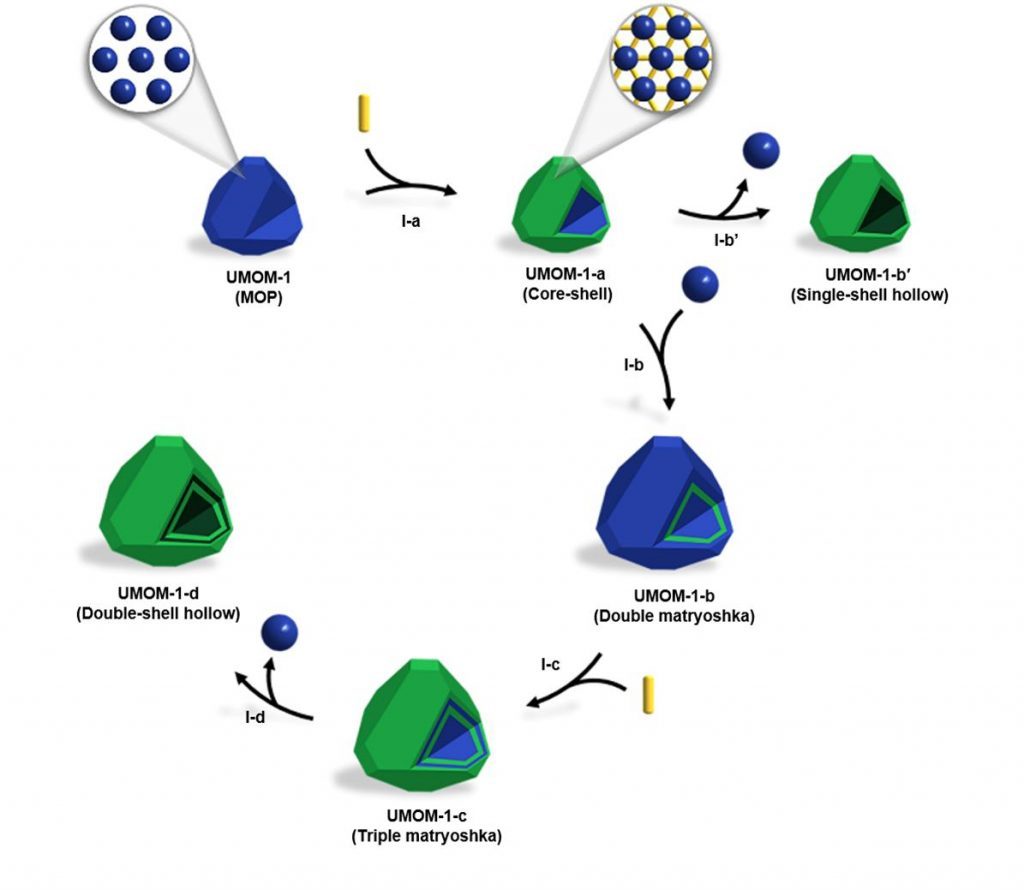 According to the research team, this synthetic strategy also yields other forms, such as solid, core-shell, double and triple matryoshka, and single-shell hollow MOMs, thereby exhibiting form evolution in MOMs.

“The best feature of this technique is that it allows two very different substances to coexist within a single crystal,” says Professor Choe. “This technique also permits greater control over size and shape of the pore, which can be then used to regulate the entrance and exit of molecules.”

This particular synthetic approach also has the potential to generate new type of porous materials containing micropores with diameters less than 2nm, macropores with diameters between 20 to 50nm, as well as pores of larger than 50 nm. Such hierarchical pore structure plays a critical role during catalysis, adsorption, and separation processes.