This Sept. 15, 2017 news item on Nanowerk announces a new product for protecting buildings from pollution,

The organic pollution decomposing properties of titanium dioxide (TiO2 ) have been known for about half a century. However, practical applications have been few and hard to develop, but now a Greek paint producer claims to have found a solution

The photocatalytic properties of anatase, one of the three naturally occurring forms of titanium dioxide, were discovered in Japan in the late 1960s. Under the influence of the UV-radiation in sunlight, it can decompose organic pollutants such as bacteria, fungi and nicotine, and some inorganic materials into carbon dioxide. The catalytic effect is caused by the nanostructure of its crystals.

Applied outdoors, this affordable and widely available material could represent an efficient self-cleaning solution for buildings. This is due to the chemical reaction, which leaves a residue on building façades, a residue then washed away when it rains. Applying it to monuments in urban areas may save our cultural heritage, which is threatened by pollutants.

However, “photocatalytic paints and additives have long been a challenge for the coating industry, because the catalytic action affects the durability of resin binders and oxidizes the paint components,” explains Ioannis Arabatzis, founder and managing director of NanoPhos, based in the Greek town of Lavrio, in one of the countries home to some of the most important monuments of human history. The Greek company is testing a paint called Kirei, inspired by a Japanese word meaning both clean and beautiful.

According to Arabatzis, it’s an innovative product because it combines the self-cleaning action of photocatalytic nanoparticles and the reflective properties of cool wall paints. “When applied on exterior surfaces this paint can reﬂect more than 94% of the incident InfraRed radiation (IR), saving energy and reducing costs for heating and cooling”, he says. “The reﬂection values are enhanced by the self-cleaning ability. Compared to conventional paints, they remain unchanged for longer.”

The development of Kirei has been included in the European project BRESAER (BREakthrough Solutions for Adaptable Envelopes in building Refurbishment) which is studying a sustainable and adaptable “envelope system” to renovate buildings. The new paint was tested and subjected to quality controls following ISO standard procedures at the company’s own facilities and in other independent laboratories. “The lab results from testing in artificial, accelerated weathering conditions are reliable,” Arabatzis claims. “There was no sign of discolouration, chalking, cracking or any other paint defect during 2,000 hours of exposure to the simulated environmental conditions. We expect the coating’s service lifetime to be at least ten years.”

Many studies are being conducted to exploit the properties of titanium dioxide. Jan Duyzer, researcher at the Netherlands Organisation for Applied Scientific Research (TNO) in Utrecht, focused on depollution: “There is no doubt about the ability of anatase to decrease the levels of nitrogen oxides in the air. But in real situations, there are many differences in pollution, wind, light, and temperature. We were commissioned by the Dutch government specifically to find a way to take nitrogen oxides out of the air on roads and in traffic tunnels. We used anatase coated panels. Our results were disappointing, so the government decided to discontinue the research. Furthermore, we still don’t know what caused the difference between lab and life. Our best current hypothesis is that the total surface of the coated panels is very small compared to the large volumes of polluted air passing over them,” he tells youris.com. 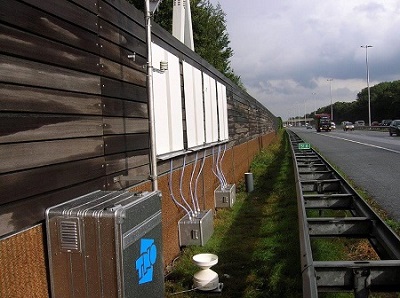 “In laboratory conditions the air is blown over the photocatalytic surface with a certain degree of turbulence. This results in the NOx-particles and the photocatalytic material coming into full contact with one another,” says engineer Anne Beeldens, visiting professor at KU Leuven, Belgium. Her experience with photocatalytic TiO2 is also limited to nitrogen dioxide (NOx) pollution.

“In real applications, the air stream at the contact surface becomes laminar. This results in a lower velocity of the air at the surface and a lower depollution rate. Additionally, not all the air will be in contact with the photocatalytic surfaces. To ensure a good working application, the photocatalytic material needs to be positioned so that all the air is in contact with the surface and flows over it in a turbulent manner. This would allow as much of the NOx as possible to be in contact with photocatalytic material. In view of this, a good working application could lead to a reduction of 5 to 10 percent of NOx in the air, which is significant compared to other measures to reduce pollutants.”

The depollution capacity of TiO2 is undisputed, but most applications and tests have only involved specific kinds of substances. More research and measurements are required if we are to benefit more from the precious features of this material.

I think the most recent piece here on protecting buildings, i.e., the historic type, from pollution is an Oct. 21, 2014 posting: Heart of stone.