(I should have published this a while ago but I think the content holds up even if it is a bit dated.) What you see on the model’s thumbnail (in the image above) is L’Oréal’s latest wearable tech as Lucy Wang notes in her January 8, 2018 preview article for inhabitat. (Note: The article is posted in a slide show, which offers quite a bit of detail (some of it technical) including this (Note: Links have been removed),

A tiny piece of innovative tech wants to help you stay away from sun-induced skin cancer. Global beauty leader L’Oréal teamed up with prolific designer Yves Behar of fuseproject to create UV Sense, the first battery-free wearable electronic UV sensor. Soon to be unveiled at the 2018 Consumer Electronics Show [CES] kicking off tomorrow [January 9, 2018], this innovative technology collects and shares real-time data on individual UV exposure within a wearable so small and thin it fits on a fingernail.

Christina Bonnington in a January 28, 2018 article for Fast Company offers less technical detail while offering many other useful tidbits (Note: Links have been removed),

… in 2016, beauty brand L’Oreal entered the space with another solution: a stretchable UV-sensing skin patch developed by the company’s technology incubator. The My UV Patch was an experiment in giving beauty consumers access to their sun-exposure data. A heart-shaped design on the patch changed colors depending on your sun exposure, which could then be analyzed via photograph in its accompanying app. L’Oreal distributed more than 1 million of the patches to consumers for free and was surprised by the level of engagement and effectiveness of the project: 34 percent of users reported wearing sunscreen more often, and 37 percent tried to stay in the shade more frequently.

Now, L’Oreal has a new wearable device for people like me—people concerned with their long-term sun-exposure risks, people at risk for melanoma, and people who want to know if they should be wearing more sunscreen or reapplying more often. But calling it a device is a bit of a stretch. The UV Sense is a circular, nail-sized sticker that’s little more than a UV sensor and an antenna. Unlike most other wearables, it’s completely batteryless; the sensor is powered by near-field communications and only transmits data when you place your phone near the sensor. Developed in partnership with Northwestern University, UV Sense now boasts the title of world’s smallest wearable.

Guive Balooch, the global vice president of L’Oréal’s technology incubator, said that the company wanted to make sure the sensor was comfortable for longtime wear. My UV Patch, L’Oreal’s first tech-centric UV-sensing product, was a disposable: You wore it for up to three days, then threw it away. The UV Sense, by contrast, lasts as long as any other wearable on the market. And besides just being small, it’s notable for its unique form factor. Its tiny size—about as thick as a credit card and lighter than a Tic Tac—makes it ideal as a stick-on nail applique. “We knew that nail art was booming,” Balooch said. “We thought that could be really interesting.” However, it’s not exclusively a nail sticker—it can just as easily be positioned on a pair of sunglasses or on another accessory you typically wear outdoors, such as a watch. On a nail, the sensor lasts for two weeks, then it needs to be readhered. (“The reason is more for the nail than the sensor,” Balooch said. “The nail is a living part of your body. UV gel or nail art normally lasts about two weeks.”)

For anyone who’d like to bear down on the technical detail, there’s Daniel Cooper’s January 7, 2018 article for engadget (Note: Links have been removed), 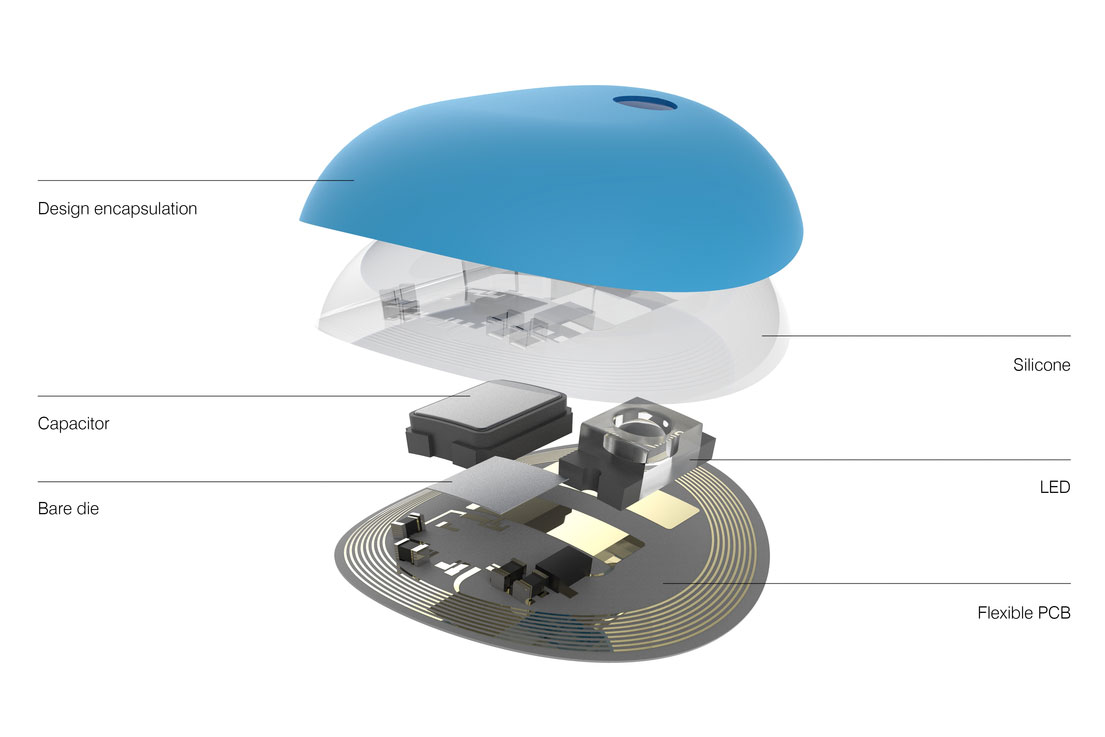 L’Oreal is working with MC10, a medical technology wearables outfit established by professor John Rogers at Northwestern University. Rogers is famous for developing the “wearable tattoo,” circuit boards no thicker than a band-aid that attach to people’s skin. The eventual goal for such technology is that it will replace the bulky and invasive monitors strapped onto hospital patients.

Interesting, yes? And as the writers note it’s not L’Oréal’s first foray into wearable tech. For anyone interested in the 2016 version, there’s my January 6, 2016 posting about ‘my UV patch”  and its introduction a the 2016 CES.  As for John Rogers, one of my latest postings on him and his work is a May 15, 2015 posting.  You can find more using “John Rogers” as your blog search term.