A Feb. 8, 2017 news item on phys.org features a ‘dream’ diode from Ulsan National Institute of Science and Technology,

A team of researchers, affiliated with UNIST [Ulsan National Institute of Science and Technology] has created a new technique that greatly enhances the performance of Schottky Diodes (metal-semiconductor junction) used in electronic devices. Their research findings have attracted considerable attention within the scientific community by solving the contact resistance problem of metal-semiconductor, which had remained unsolved for almost 50 years.

As described in the January [2017] issue of Nano Letters, the researchers have created a new type of diode with a graphene insertion layer sandwiched between metal and semiconductor. This new technique blows all previous attemps out the water, as it is expected to significantly contribute to the semiconductor industry’s growth.

A Jan. 27, 2017 UNIST press release, (also on EurekAlert), which originated the news item, describes the research in greater detail,

The Schottky diode is one of the oldest and most representative semiconductor devices, formed by the junction of a semiconductor with a metal.  However, due to the atomic intermixing along the interface between two materials, it has been impossible to produce an ideal diode. (An ideal diode acts like a perfect conductor when voltage is applied forward biased and like a perfect insulator when voltage is applied reverse biased.) 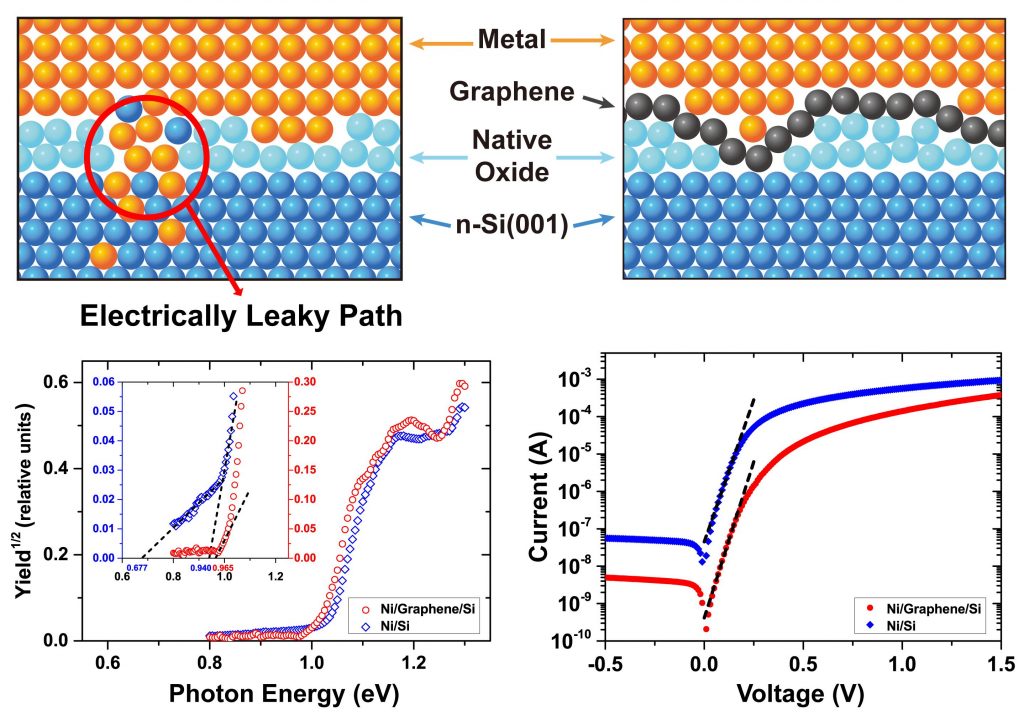 The schematic view of internal photoemission (IPE) measurements on metal/n-Si(001) junctions with Ni, Pt, and Ti electrodes for with and without a graphene insertion layer.

Professor Kibog Park of Natural Science solved this problem by inserting a graphene layer at the metal-semiconductor interface. In the study, the research team demonstrated that this graphene layer, consisting of a single layer of carbon atoms can not only suppress the material intermixing substantially, but also matches well with the theoretical prediction.

“The sheets of graphene in graphite have a space between each sheet that shows a high electron density of quantum mechanics in that no atoms can pass through,” says Professor Park. “Therefore, with this single-layer graphene sandwiched between metal and semiconductor, it is possible to overcome the inevitable atomic diffusion problem.”

The study also has the physiological meaning of confirming the theoretical prediction that “In the case of silicon semiconductors, the electrical properties of the junction surfaces hardly change regardless of the type of metal they use,” according to Hoon Hahn Yoon (Combined M.S./Ph.D. student of Natural Science), the first author of the study.

The internal photoemission method was used to measure the electronic energy barrier of the newly-fabricated metal/graphene/n-Si(001) junction diodes. The Internal Photoemission (IPE) Measurement System in the image shown above has contributed greatly to these experiments. This system has been developed by four UNIST graduate students (Hoon Han Yoon, Sungchul Jung, Gahyun Choi, and Junhyung Kim), which was carried out as part of an undergraduate research project in 2012 and was supported by the Korea Foundation for the Advancement of Science and Creativity (KOFAC). 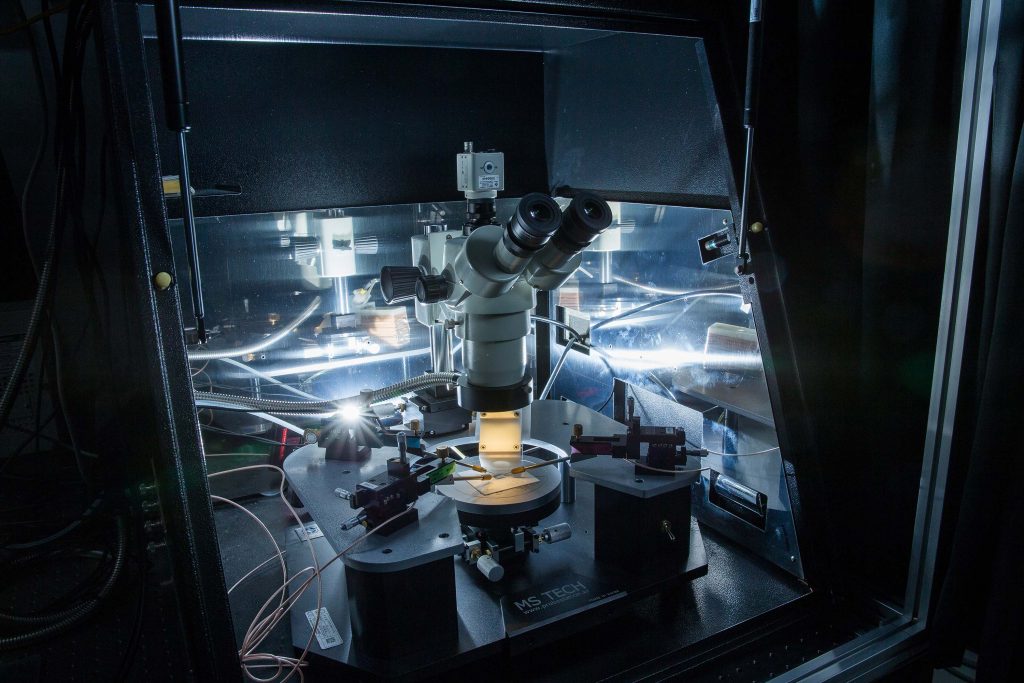 “Students have teamed up and carried out all the necessary steps for the research since they were undergraduates,” Professor Park says. “Therefore, this research is a perfect example of time, persistence, and patience paying off.”

This study has been jointly conducted by Professor Hu Young Jeong of the UNIST Central Research Facilities (UCRF), Professor Kwanpyo Kim of Natural Science, Professor Soon-Yong Kwon of Materials Science and Engineering, and Professor Yong Soo Kim of Ulsan University. It has been also supported by the National Research Foundation of Korea, Nuclear Research Basis Expansion Project, as well as the Global Ph.D Fellowship (GPF).

If the thought of having expensive perfume last longer is appealing then this research will pique your interest. From a Feb. 17, 2016 American Chemical Society (ACS) news release, also on EurekAlert, (Note: Links have been removed),

Fragrances can be powerful. They can sooth or revitalize, evoke the forest or sea, and remind us of the past. To capture them, manufacturers infuse scents into products from toilet bowl cleaners to luxury perfumes. But once released from a bottle, fragrances evaporate quickly. Now researchers report in the journal ACS Applied Materials & Interfaces a new way to encapsulate fragrance molecules to make a product’s scent last.

The challenge with creating long-lasting fragrances is that aroma molecules tend to be small and volatile. That means they can sneak through barriers easily and disperse quickly. Some methods have been developed to prevent fragrance molecules from hastily escaping from a spritz of perfume or a dollop of lotion. For example, one process slows down the molecules by packaging them in microcapsules. But the technique is inefficient and doesn’t control for shell size, thickness or structure, which makes it harder to work with. David A. Weitz and colleagues wanted to figure out a new strategy using microfluidic and bulk emulsification to encapsulate fragrances.

First, to get a homogeneous mixture of water and α-pinene molecules — found in oils from pine trees and rosemary — the researchers emulsified them (think blending together two ingredients like oil and vinegar that normally separate). Pumping the emulsion into tiny glass microfluidic tubes created uniform microcapsules. Testing showed that the capsules successfully slowed the release of α-pinene. In addition to its use in the fragrance industry, the researchers say the technique could have applications in drug delivery or other areas.