This bacterium (bacteria being the plural) loves gold, which is lucky for anyone trying to develop artificial photosynthesis.From an October 9, 2018 news item on ScienceDaily,

A bacterium named Moorella thermoacetica won’t work for free. But UC Berkeley [University of California at Berkeley] researchers have figured out it has an appetite for gold. And in exchange for this special treat, the bacterium has revealed a more efficient path to producing solar fuels through artificial photosynthesis.

An October 5, 2018 UC Berkeley news release by Theresa Duque (also on EurekAlert but published on October 9, 2018), which originated the news item, expands on the theme,

M. thermoacetica first made its debut as the first non-photosensitive bacterium to carry out artificial photosynthesis (link is external) in a study led by Peidong Yang, a professor in UC Berkeley’s College of Chemistry. By attaching light-absorbing nanoparticles made of cadmium sulfide (CdS) to the bacterial membrane exterior, the researchers turned M. thermoacetica into a tiny photosynthesis machine, converting sunlight and carbon dioxide into useful chemicals.

Now Yang and his team of researchers have found a better way to entice this CO2-hungry bacterium into being even more productive. By placing light-absorbing gold nanoclusters inside the bacterium, they have created a biohybrid system that produces a higher yield of chemical products than previously demonstrated. The research, funded by the National Institutes of Health, was published on Oct. 1 in Nature Nanotechnology (link is external).

For the first hybrid model, M. thermoacetica-CdS, the researchers chose cadmium sulfide as the semiconductor for its ability to absorb visible light. But because cadmium sulfide is toxic to bacteria, the nanoparticles had to be attached to the cell membrane “extracellularly,” or outside the M. thermoacetica-CdS system. Sunlight excites each cadmium-sulfide nanoparticle into generating a charged particle known as an electron. As these light-generated electrons travel through the bacterium, they interact with multiple enzymes in a process known as “CO2 reduction,” triggering a cascade of reactions that eventually turns CO2 into acetate, a valuable chemical for making solar fuels.

But within the extracellular model, the electrons end up interacting with other chemicals that have no part in turning CO2 into acetate. And as a result, some electrons are lost and never reach the enzymes. So to improve what’s known as “quantum efficiency,” or the bacterium’s ability to produce acetate each time it gains an electron, the researchers found another semiconductor: nanoclusters made of 22 gold atoms (Au22), a material that M. thermoacetica took a surprising shine to. 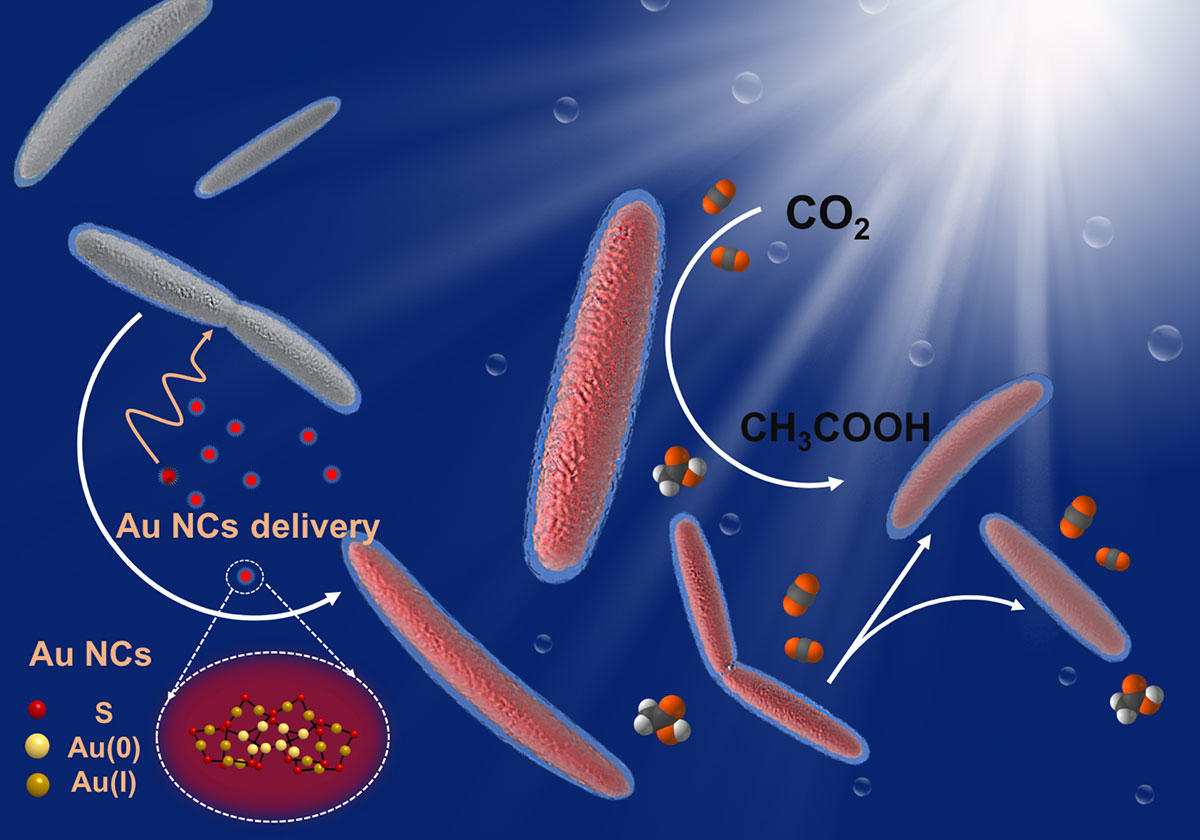 Figure: A single nanocluster of 22 gold atoms – Au22 – is only 1 nanometer in diameter, allowing it to easily slip through the bacterial cell wall.

“We selected Au22 because it’s ideal for absorbing visible light and has the potential for driving the CO2 reduction process, but we weren’t sure whether it would be compatible with the bacteria,” Yang said. “When we inspected them under the microscope, we discovered that the bacteria were loaded with these Au22 clusters – and were still happily alive.”

The researchers also selected Au22 ­– dubbed by the researchers as “magic” gold nanoclusters – for its ultrasmall size: A single Au22nanocluster is only 1 nanometer in diameter, allowing each nanocluster to easily slip through the bacterial cell wall.

“By feeding bacteria with Au22 nanoclusters, we’ve effectively streamlined the electron transfer process for the CO2 reduction pathway inside the bacteria, as evidenced by a 2.86 percent quantum efficiency – or 33 percent more acetate produced within the M. thermoacetica-Au22 system than the CdS model,” Yang said.

The magic gold nanocluster is the latest discovery coming out of Yang’s lab, which for the past six years has focused on using biohybrid nanostructures to convert CO2 into useful chemicals as part of an ongoing effort to find affordable, abundant resources for renewable fuels, and potential solutions to thwart the effects of climate change.

“Next, we’d like to find a way to reduce costs, improve the lifetimes for these biohybrid systems, and improve quantum efficiency,” Yang said. “By continuing to look at the fundamental aspect of how gold nanoclusters are being photoactivated, and by following the electron transfer process within the CO2 reduction pathway, we hope to find even better solutions.”

For lovers of animation, the folks at UC Berkeley have produced this piece about the ‘gold-loving’ bacterium,