The artist credited with the work seen in the above, Joseph Cohen, has done something remarkable with carbon nanotubes (CNTs). Something even more remarkable than the painting as Sarah Cascone recounts in her August 30, 2019 article for artnet.com (Note: A link has been removed),

Not every artist can say that his or her work is helping in the fight against cancer. But over the past several years, Joseph Cohen has done just that, working to develop a new, high-tech paint that can be used not only on canvas, but also to detect cancers and medical conditions such as hypertension and diabetes.

Sloan Kettering Institute scientist Daniel Heller first suggested that Cohen come work at his lab after seeing the artist’s work, which is often made with pigments that incorporate diamond dust and gold, at the DeBuck Gallery in New York.

“We initially thought that in working with an artist, we would make art to shed a little light on our science for the public,” Heller told the Memorial Sloan Kettering blog. “But the collaboration actually taught us something that could help us shine a light on cancer.”

For Cohen, the project was initially intended to develop a new way of art-making. In Heller’s lab, he worked with carbon nanotubes, which Heller was already employing in cancer research, for their optical properties. “They fluoresce in the infrared spectrum,” Cohen says. “That gives artists the opportunity to create paintings in a new spectrum, with a whole new palette of colors.”

“What you’re perceiving as a static painting is actually in motion,” Cohen says. “I’m creating paintings that exist outside of the visible experience.”

That same imaging technique can be used by doctors looking for microalbuminuria, a condition that causes the kidneys to leak trace amounts of albumin into urine, which is an early sign of of several cancers, diabetes, and high blood pressure.

Cohen helped co-author a paper published this month in Nature Communications about using the nanosensor paint in litmus paper tests with patient urine samples. The study found that the paint, when viewed through infrared light, was able to reveal the presence of albumin based on changes in the paint’s fluorescence after being exposed to the urine sample.

“It’s easy to detect albumen with a dipstick if there’s a lot of levels in the urine, but that would be like looking at stage four cancer,” Cohen says. “This is early detection.”

What’s more, a nanosensor paint can be easily used around the world, even in poor areas that don’t have access to the best diagnostic technologies. Doctors may even be able to view the urine samples using an infrared imaging attachments on their smartphones.

Amazing, eh? If you have the time, do read Cascone’s article in its entirety and should your curiosity be insatiable, there’s also an August 22, 2019 posting by Jim Stallard on the Memorial Sloan Kettering Cancer Center blog,

Joseph Cohen has graced this blog before in a May 3, 2019 posting titled, Where do I stand? a graphene artwork. It seems Cohen is very invested in using nanoscale carbon particles for his art.

This artistic feud has its roots in a nanotechnology-enabled coating material known as Vantablack. Surrey Nanosystems in the UK sent me an announcement which I featured here in a March 14, 2016 posting. About one month later (in an April 16, 2016 posting regarding risks and an artistic controversy), I recounted the story of the controversy, which resulted from the company’s exclusive deal with artist, Sir Anish Kapoor (scroll down the post about 60% of the way to ‘Anish Kapoor and his exclusive rights to Vantablack’.

Kapoor’s response can seen in a January 30,2019 article by Sarah Cascone for artnet.com,

… Semple started selling what he called “the world’s pinkest pink, available to anyone who wasn’t Kapoor.”

“I wanted to make a point about elitism and self-expression and the fact that everybody should be able to make art,” Semple said. But within weeks, “tragedy struck. Anish Kapoor got our pink! And he dipped his middle finger in it and put a picture on Instagram!”

Cascone’s article, which explores the history of the feud in greater detail also announces the latest installment (Note: Links have been removed),

… Semple decided to team up with paint makers and about 1,000 artists to develop and test a competitor to Vantablack. His first version, Black 2.0, wasn’t quite as black as Vantablack, since it only absorbed 95% of the visible light (Vantablack absorbs about 99%).

Now, Black 3.0 is out and available on Kickstarter for about $32 per 150ml tube. According to Semple, it is the blackest, mattest, flattest acrylic paint available on the planet, capturing up to 99% of all the visible spectrum radiation. The paint is based on a new pigment called Black Magick, whose exact composition they aren’t disclosing. Black 3.0 is made up of this pigment, combined with a custom acrylic polymer. Semple and his colleagues claim that the polymer “is special because it has more available bonds than any other acrylic polymer being used in paints,” allowing more pigment density. The paint is then finished with what they claim are new “nano-mattifiers,” which remove any shine from the paint. Unlike Vantablack, the resulting paint is soluble in water and nontoxic. [emphasis mine]

I wonder what a ‘nano-mattifier’ might be. Regardless, I’m glad to see this new black is (with a nod to my April 16, 2016 posting about risks and this artistic controversy) nontoxic.

I don’t usually embed videos that run over 5 mins. but Stuart Semple is very appealing in at least two senses of the word,

The US National Aeronautics and Space Administration (NASA) has made an open call for art works that could be part of the the Origins, Spectral Interpretation, Resource Identification, Security-Regolith Explorer (OSIRIS-REx) spacecraft mission bound for Bennu (an asteroid). From a Feb. 23, 2016 NASA news release on EurekAlert,

OSIRIS-REx is scheduled to launch in September and travel to the asteroid Bennu. The #WeTheExplorers campaign invites the public to take part in this mission by expressing, through art, how the mission’s spirit of exploration is reflected in their own lives. Submitted works of art will be saved on a chip on the spacecraft. The spacecraft already carries a chip with more than 442,000 names submitted through the 2014 “Messages to Bennu” campaign.

“The development of the spacecraft and instruments has been a hugely creative process, where ultimately the canvas is the machined metal and composites preparing for launch in September,” said Jason Dworkin, OSIRIS-REx project scientist at NASA’s Goddard Space Flight Center in Greenbelt, Maryland. “It is fitting that this endeavor can inspire the public to express their creativity to be carried by OSIRIS-REx into space.”

A submission may take the form of a sketch, photograph, graphic, poem, song, short video or other creative or artistic expression that reflects what it means to be an explorer. Submissions will be accepted via Twitter and Instagram until March 20, 2016. For details on how to include your submission on the mission to Bennu, go to:

“Space exploration is an inherently creative activity,” said Dante Lauretta, principal investigator for OSIRIS-REx at the University of Arizona, Tucson. “We are inviting the world to join us on this great adventure by placing their art work on the OSIRIS-REx spacecraft, where it will stay in space for millennia.”

The spacecraft will voyage to the near-Earth asteroid Bennu to collect a sample of at least 60 grams (2.1 ounces) and return it to Earth for study. Scientists expect Bennu may hold clues to the origin of the solar system and the source of the water and organic molecules that may have made their way to Earth.

I wonder why the Egyptian mythology as in Osiris and Bennu. For those who need a refresher on the topic, here’s more from the Osiris entry on Wikipedia (Note: Links have been removed),

Osiris (/oʊˈsaɪərᵻs/, alternatively Ausir, Asiri or Ausar, among other spellings), was an Egyptian god, usually identified as the god of the afterlife, the underworld, and the dead, but more appropriately as the god of transition, resurrection, and regeneration.

Then there’s this from the Bennu entry on Wikipedia (Note: Links have been removed),

The Bennu is an ancient Egyptian deity linked with the sun, creation, and rebirth. It may have been the inspiration for the phoenix in Greek mythology.

You can find out more about Bennu, the asteriod, on its webpage, The long Strange Trip of Bennu on the NASA website (which also features a video animation), Note: A link has been removed,

… Born from the rubble of a violent collision, hurled through space for millions of years and dismembered by the gravity of planets, asteroid Bennu had a tough life in a rough neighborhood: the early solar system. …

“We are going to Bennu because we want to know what it has witnessed over the course of its evolution,” said Edward Beshore of the University of Arizona, Deputy Principal Investigator for NASA’s asteroid-sample-return mission OSIRIS-REx (Origins, Spectral Interpretation, Resource Identification, Security – Regolith Explorer). The mission will be launched toward Bennu in late 2016, arrive at the asteroid in 2018, and return a sample of Bennu’s surface to Earth in 2023.

“Bennu’s experiences will tell us more about where our solar system came from and how it evolved. Like the detectives in a crime show episode, we’ll examine bits of evidence from Bennu to understand more completely the story of the solar system, which is ultimately the story of our origin.”

As for the spacecraft, you can find out more about OSIRIS-REx here.

Getting back to the artwork, Sarah Cascone has written a Feb. 22, 2016 posting for artnet news, which features the call for submissions and some work which already been submitted (Note: Links have been removed),

The near-Earth asteroid Bennu will become the first extra-terrestrial art gallery, with the space agency inviting the public to contribute works of art that are inspired by the spirit of exploration.

The project will follow other important moments in space art history, which include work by Invader traveling aboard the International Space Station, conceptual artwork on the UKube-1 satellite, and even a bonsai tree launched into space.

Here’s a selection of the artworks being embedded in Cascone’s posting, 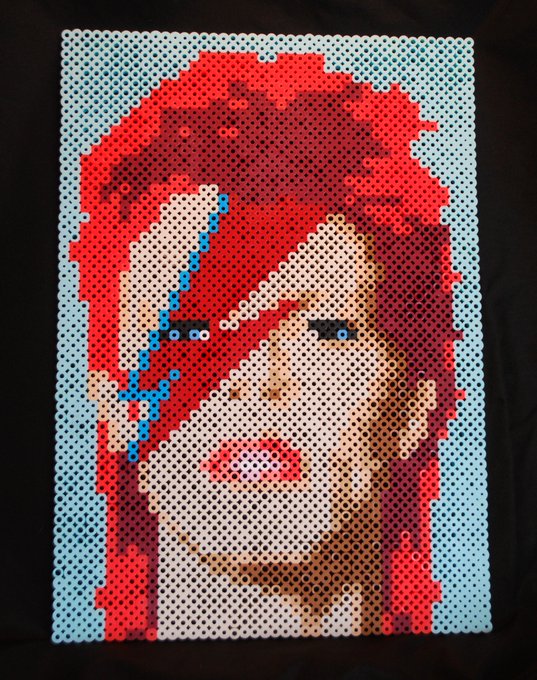 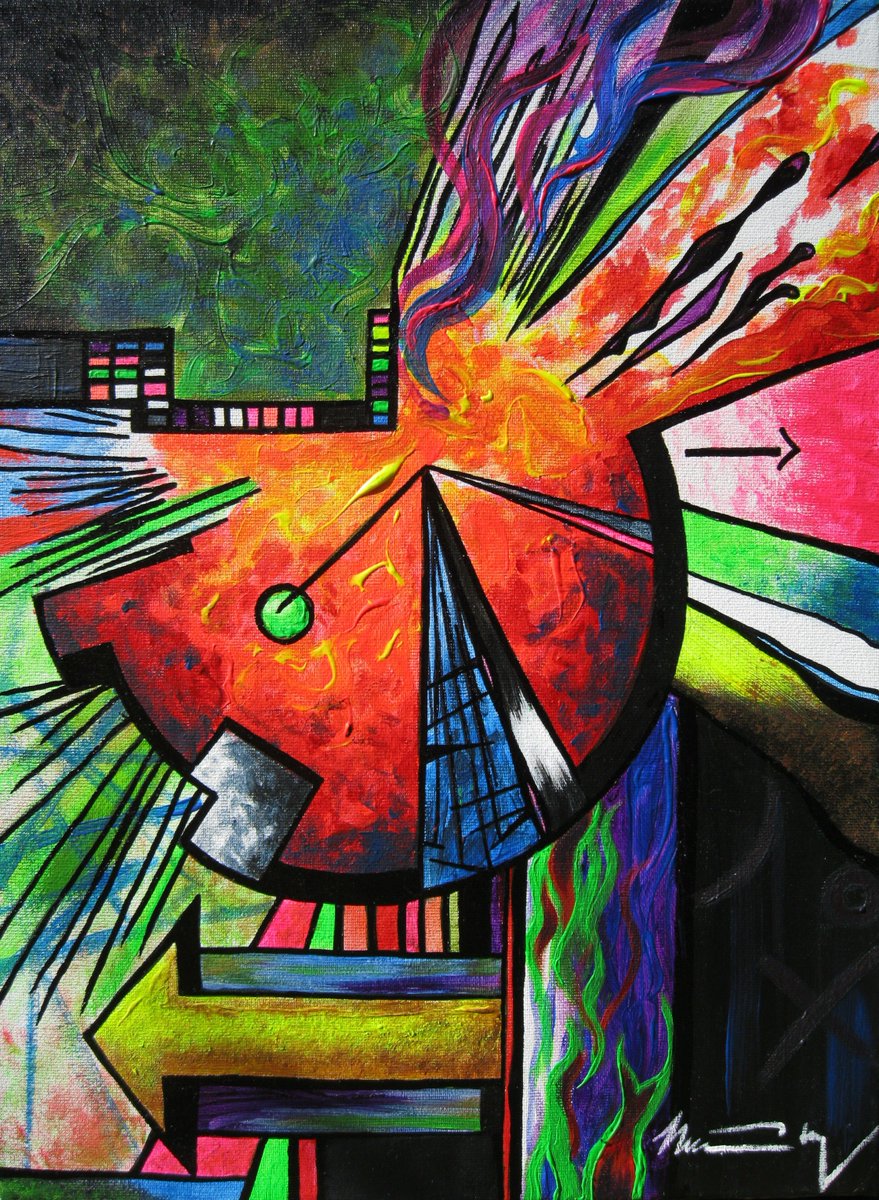 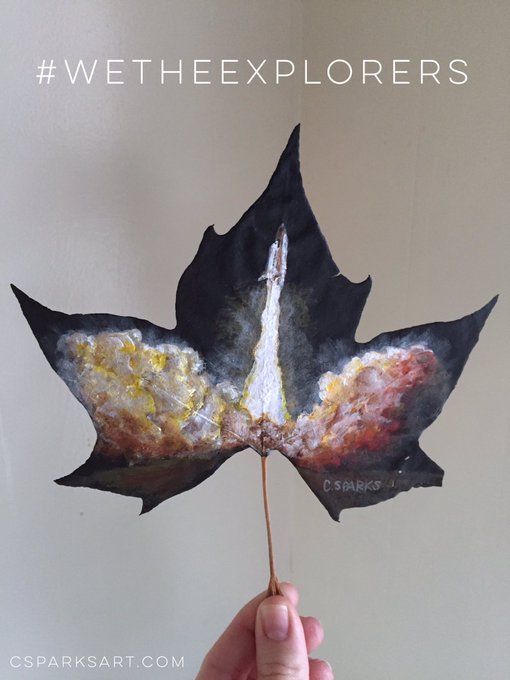