At a guess, this was originally a photograph which has been passed through some sort of programme to give it a paintinglike quality.

Moving onto the research, I don’t see any reference to memristors (another of the ‘devices’ that mimics the human brain) so perhaps this is an entirely different way to mimic human brains? A February 5, 2019 news item on ScienceDaily announces the work from Linkoping University (Sweden),

A new transistor based on organic materials has been developed by scientists at Linköping University. It has the ability to learn, and is equipped with both short-term and long-term memory. The work is a major step on the way to creating technology that mimics the human brain.

Until now, brains have been unique in being able to create connections where there were none before. In a scientific article in Advanced Science, researchers from Linköping University describe a transistor that can create a new connection between an input and an output. They have incorporated the transistor into an electronic circuit that learns how to link a certain stimulus with an output signal, in the same way that a dog learns that the sound of a food bowl being prepared means that dinner is on the way.

A normal transistor acts as a valve that amplifies or dampens the output signal, depending on the characteristics of the input signal. In the organic electrochemical transistor that the researchers have developed, the channel in the transistor consists of an electropolymerised conducting polymer. The channel can be formed, grown or shrunk, or completely eliminated during operation. It can also be trained to react to a certain stimulus, a certain input signal, such that the transistor channel becomes more conductive and the output signal larger.

“It is the first time that real time formation of new electronic components is shown in neuromorphic devices”, says Simone Fabiano, principal investigator in organic nanoelectronics at the Laboratory of Organic Electronics, Campus Norrköping.

“We have shown that we can induce both short-term and permanent changes to how the transistor processes information, which is vital if one wants to mimic the ways that brain cells communicate with each other”, says Jennifer Gerasimov, postdoc in organic nanoelectronics and one of the authors of the article.

By changing the input signal, the strength of the transistor response can be modulated across a wide range, and connections can be created where none previously existed. This gives the transistor a behaviour that is comparable with that of the synapse, or the communication interface between two brain cells.

It is also a major step towards machine learning using organic electronics. Software-based artificial neural networks are currently used in machine learning to achieve what is known as “deep learning”. Software requires that the signals are transmitted between a huge number of nodes to simulate a single synapse, which takes considerable computing power and thus consumes considerable energy.

“We have developed hardware that does the same thing, using a single electronic component”, says Jennifer Gerasimov.

“Our organic electrochemical transistor can therefore carry out the work of thousands of normal transistors with an energy consumption that approaches the energy consumed when a human brain transmits signals between two cells”, confirms Simone Fabiano.

The transistor channel has not been constructed using the most common polymer used in organic electronics, PEDOT, but instead using a polymer of a newly-developed monomer, ETE-S, produced by Roger Gabrielsson, who also works at the Laboratory of Organic Electronics and is one of the authors of the article. ETE-S has several unique properties that make it perfectly suited for this application – it forms sufficiently long polymer chains, is water-soluble while the polymer form is not, and it produces polymers with an intermediate level of doping. The polymer PETE-S is produced in its doped form with an intrinsic negative charge to balance the positive charge carriers (it is p-doped).

There’s one other image associated this work that I want to include here,

A March 5, 2018 news item on Nanowerk describes the latest stretchable electrode (Note: A link has been removed),

Klas Tybrandt, principal investigator at the Laboratory of Organic Electronics at Linköping University [Sweden], has developed new technology for long-term stable neural recording. It is based on a novel elastic material composite, which is biocompatible and retains high electrical conductivity even when stretched to double its original length.

The result has been achieved in collaboration with colleagues in Zürich and New York. The breakthrough, which is crucial for many applications in biomedical engineering, is described in an article published in the prestigious scientific journal Advanced Materials (“High-Density Stretchable Electrode Grids for Chronic Neural Recording”).

A March 5, 2018 Linköping University press release, which originated the news item, gives more detail but does not mention that the nanowires are composed of titanium dioxide (you can find additional details in the abstract for the paper; link and citation will be provided later in this posting)),

The coupling between electronic components and nerve cells is crucial not only to collect information about cell signalling, but also to diagnose and treat neurological disorders and diseases, such as epilepsy.

It is very challenging to achieve long-term stable connections that do not damage neurons or tissue, since the two systems, the soft and elastic tissue of the body and the hard and rigid electronic components, have completely different mechanical properties. 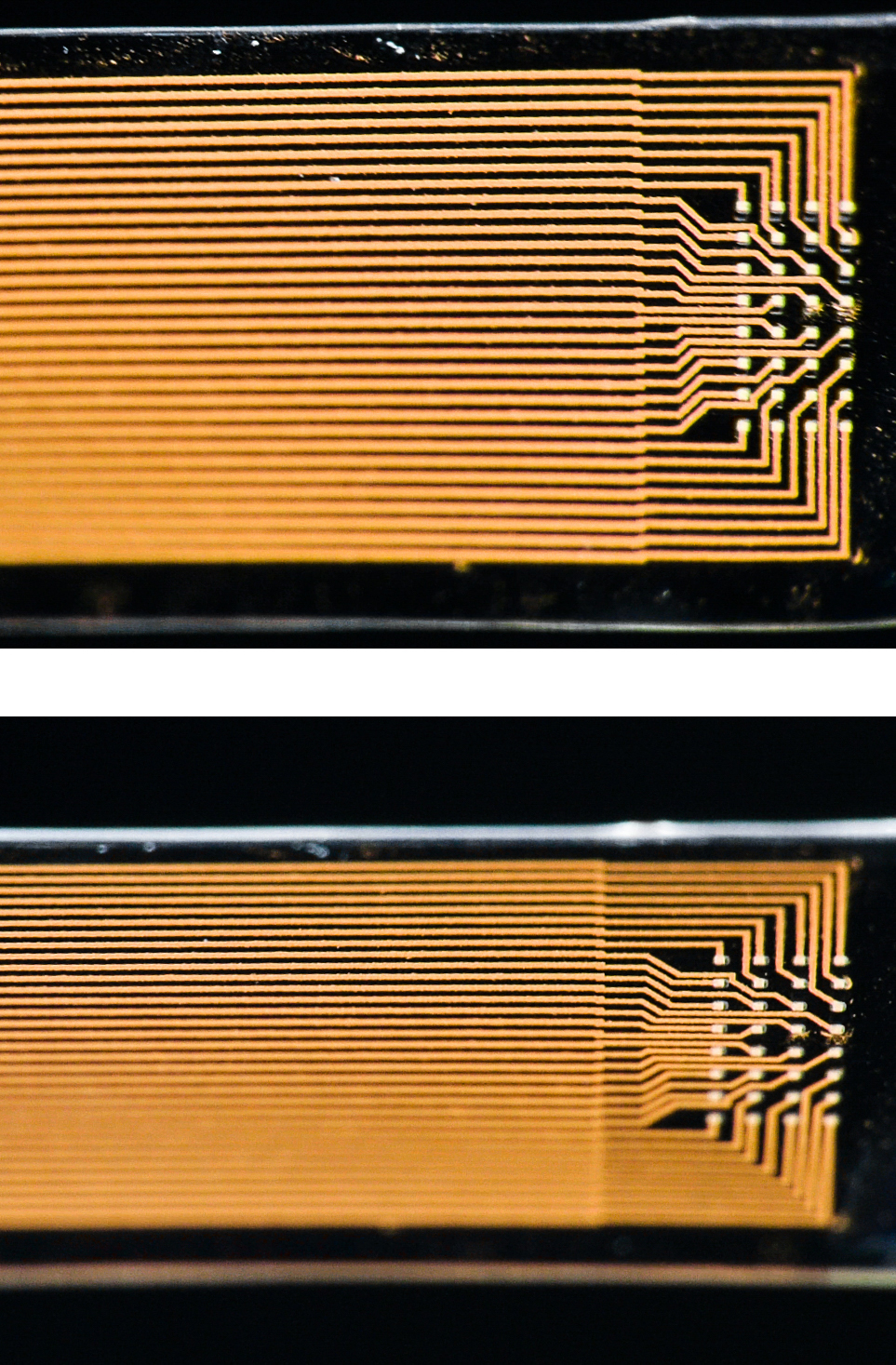 “As human tissue is elastic and mobile, damage and inflammation arise at the interface with rigid electronic components. It not only causes damage to tissue; it also attenuates neural signals,” says Klas Tybrandt, leader of the Soft Electronics group at the Laboratory of Organic Electronics, Linköping University, Campus Norrköping.

Klas Tybrandt has developed a new conductive material that is as soft as human tissue and can be stretched to twice its length. The material consists of gold coated titanium dioxide nanowires, embedded into silicone rubber. The material is biocompatible – which means it can be in contact with the body without adverse effects – and its conductivity remains stable over time.

“The microfabrication of soft electrically conductive composites involves several challenges. We have developed a process to manufacture small electrodes that also preserves the biocompatibility of the materials. The process uses very little material, and this means that we can work with a relatively expensive material such as gold, without the cost becoming prohibitive,” says Klas Tybrandt.

The electrodes are 50 µm [microns or micrometres] in size and are located at a distance of 200 µm from each other. The fabrication procedure allows 32 electrodes to be placed onto a very small surface. The final probe, shown in the photograph, has a width of 3.2 mm and a thickness of 80 µm.

The soft microelectrodes have been developed at Linköping University and ETH Zürich, and researchers at New York University and Columbia University have subsequently implanted them in the brain of rats. The researchers were able to collect high-quality neural signals from the freely moving rats for 3 months. The experiments have been subject to ethical review, and have followed the strict regulations that govern animal experiments. 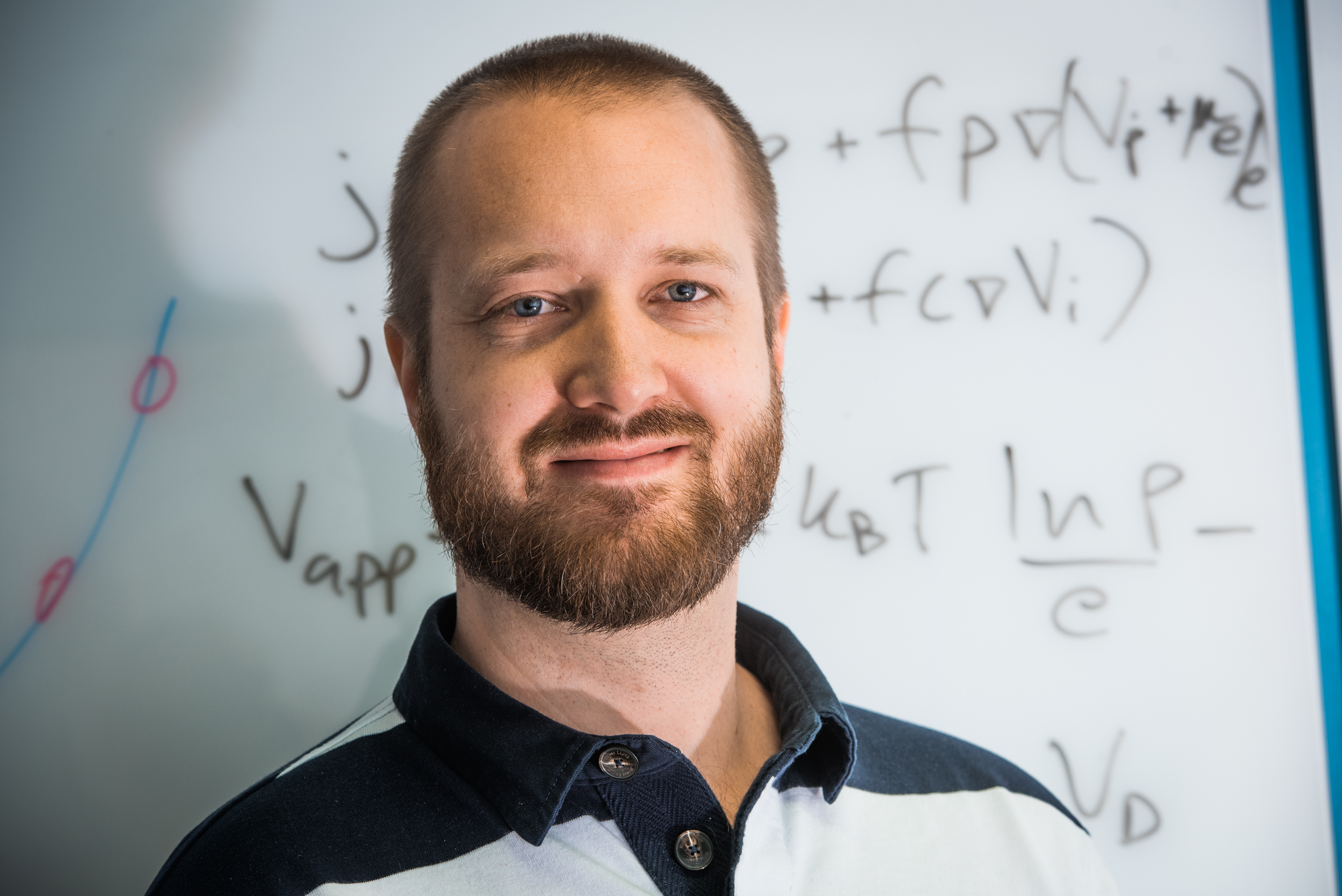 “When the neurons in the brain transmit signals, a voltage is formed that the electrodes detect and transmit onwards through a tiny amplifier. We can also see which electrodes the signals came from, which means that we can estimate the location in the brain where the signals originated. This type of spatiotemporal information is important for future applications. We hope to be able to see, for example, where the signal that causes an epileptic seizure starts, a prerequisite for treating it. Another area of application is brain-machine interfaces, by which future technology and prostheses can be controlled with the aid of neural signals. There are also many interesting applications involving the peripheral nervous system in the body and the way it regulates various organs,” says Klas Tybrandt.

The breakthrough is the foundation of the research area Soft Electronics, currently being established at Linköping University, with Klas Tybrandt as principal investigator.
liu.se/soft-electronics

A video has been made available (Note: For those who find any notion of animal testing disturbing; don’t watch the video even though it is an animation and does not feature live animals), 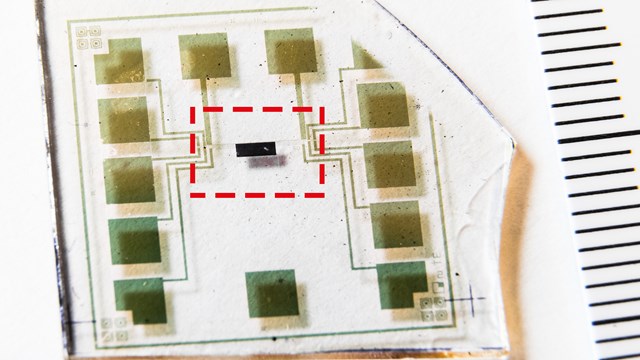